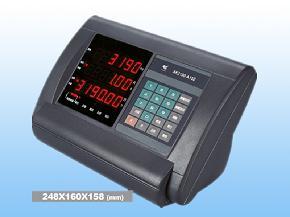 Proofreading method
The illegal calibration of the electronic weighing instrument is carried out by using the mass value of the standard weight and the allowable range of the calibration weight value of the calibration procedure, Because the calibration code value has a certain space range (for example, for an electronic scale with a maximum weighing of 150kg, its 50kg internal code value is in the range of 12000~18000, which can be calibrated to a 50kg display value. If the actual weight of the calibration weight is 49kg and the calibration display value is 50kg, then the actual weight of the electronic scale when it displays 150kg is 147kg. It goes without saying what consequences this scale will have in market transactions. This is the importance of legal measurement in the national economy.
After installation, check whether the connection mode of different parts of the scale body is intact. The scale body should not contact any part of the economic foundation. The distance between the scale body and the surrounding edge guard iron is 10mm~15mm.
Before commissioning, turn on the power switch to preheat for 15 minutes, try to use a vehicle with a load close to the maximum proportion, pass and brake on the load bearing platform, and tighten the high-strength bolts of each load cell with a torque wrench.
1. Use a digital voltmeter to measure the output voltage of each load cell in turn. If there is any difference, adjust the corresponding two precision adjustable resistors in the junction box to reduce the difference between them. However, it should be noted that the two adjustable resistors should rotate in the same direction and the same amount. When rotating clockwise, the resistance decreases, the output voltage increases, and the display value increases. Otherwise, it is the opposite. Adjust until the load cell output matches.
2. After adjusting the bearing point, the weight equal to the maximum weight shall be evenly added to the bearing platform. According to the positions and methods described in the specifications of various weighing displays, take down the weighing after the displayed value is consistent with the weighing value, and confirm that the empty scale displays "0". Finally, the maximum weighing point is divided into several parts, including the minimum weighing point, the maximum weighing point and the tolerance variation of each weighing point. The error requirement of each weighing point is not greater than the maximum tolerance requirement of each weighing point.
3. Refer to the operation manual of the weighing display (professional technical manual), check the correctness of various function keys, and improve the weighing accuracy of the electronic truck scale.