Old scale: how to calibrate the old scale is not allowed

How to calibrate the old scale is not allowed
The lead seal will be damaged by measuring range calibration, so as long as our measurement administrator strictly turns off the lead, this false phenomenon can be eliminated. However, some instruments cannot be lead sealed. The password and plug are put in the calibration procedure. The known password and calibration program can freely change the weighing size of the scale. It is particularly recommended that the manufacturers of these instruments modify them in a timely manner to simplify the design and facilitate the measurement management of local metrological verification institutions. 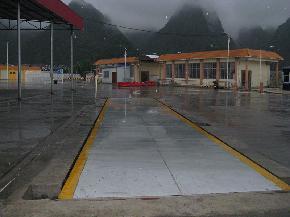 How to calibrate the old scale is not allowed
1、 The instrument ensures the base number of negative numbers, so as to reduce the total weight of incoming goods. For example, a truck must have a gross weight of 15 tons, a tare weight of 5 tons, and a net weight of 10 tons. On the other hand, if the meter shows [Assume 1 ton] after ensuring a negative number, then the gross weight of the truck becomes 14 tons and the net weight of the goods is 9 tons, which is simple and convenient for the operation of eating 1 ton. The premise for the success of this false method is that the lawless elements collude with the weighing clerk and the lawless merchant both inside and outside, and conspire to cause pollution. The prevention method is to confirm whether the instrument is zero before the cargo owner passes the electronic scale. If it is not zero, you can use the "Zero" or "Peel" key to return to zero before weighing.
2、 The old scale is used to place bricks, soil blocks and other hard objects at the bottom of the scale, and the counter force principle is used to reduce the total weight of the incoming weight. As we all know, after the truck is loaded on the electronic scale loading platform, the gravity will be transferred to the load cells at each loading point. At this time, the output terminal of the sensor generates voltage signal, which is amplified by operation, and the digital signal after A/D conversion is sent to the central processor again for processing. Finally, the display shows that the weight of the truck is vertically downward. Therefore, if bricks and soil blocks of a certain height are paved at the bottom of the weighbridge, an upward reaction force will be generated, and the output signal of the sensor will become smaller. For example, this happened in a coal preparation plant in Hefei, but when the truck was full, it was lighter than the tare weight after exceeding pounds gross weight, which aroused the suspicion of the weighing clerk. It is detected that the edges of the four sensors of the weighbridge are paved with large wood chips. After the large wood chips are removed, the electronic weighbridge returns to normal.
3、 Use the false increase and decrease keys of the old scale to control the output of the sensor and the display of the display, from large to large and from small to small, to reach the button quantity of the scale. The 80 ton electronic ground wire of a university in Xianyang has a bottom of more than ten tons after being connected to the power supply. The inspection results show that the sensor located in the middle of Weimeng room is connected to this electronic device. Due to their immature skills, the thieves may be very weak. The sensor does not work due to the wrong position when connecting the sensor cable, and the ground wire of the device is restored to normal after removal.
4、 Change the normal weighing of the electronic weighbridge through the calibration procedure of the instrument. For example, load 10 tons of standard weight and change the displayed value of 10 tons according to the range calibration method to achieve the purpose of the dragging amount of the gram scale. Any instrument has a calibration procedure, which can be any of Shanghai, Shanghai, Shanghai, Shanghai, Shanghai and Shanghai. Most instruments are measured by measuring range. The measuring error of the scale is specified by relevant regulations. The scale can only be used after passing the verification. At the same time, the local metrological verification organization shall add a lead seal on the instrument to prevent tampering. Once the lead seal is damaged, the scale will become invalid if it is qualified.
Nanning Weighing Instrument Factory was founded in 1956. Its main products include weights, scales, weights, mechanical scales, mechanical scales, standard weights, old scales, scale accessories, mechanical scale accessories, etc. It has a long history of more than 50 years of production and operation of weighing instruments. The registered capital is 2.82 million yuan, the total assets are 13 million yuan, the floor area is 7280 m2, and the building area is 11358 m2. Annual production capacity: 500 electronic truck scales, 50000 desk scales and 50000 electronic platform scales. It is a professional manufacturer engaged in the R&D, design, production, sales and service of industrial weighing instruments, household weighing instruments and other products, which was established earlier and has a relatively large scale in Guangxi weighing instrument industry.